Circular Economy: how LIFE projects are performing all round 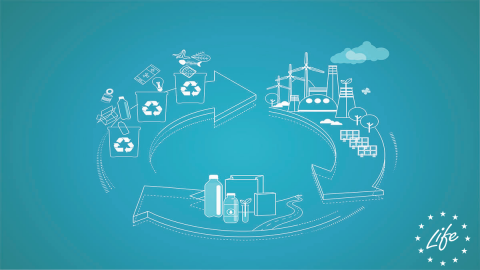 In Europe, each person on average produces up to six tonnes of waste each year. This is more than three times the weight of a passenger car. Several LIFE projects are finding ways to turn this waste into valuable resources as can be seen below.

The EU has been working hard to ensure that waste from individuals and industry is dealt with in the best way possible. The EU Waste Framework Directive expects Member States to recycle 50% of their municipal waste and 70% of their construction waste. And in 2020, the European Commission adopted a new Circular Economy Action Plan as part of the European Green Deal. This plan encourages sustainable consumption so that the resources used are kept in the economy for as long as possible.

Steering Finland towards a circular economy

Finland’s goal is to be a carbon-neutral circular economy society by 2035. LIFE IP CIRCWASTE–FINLAND is helping make this happen. It is Finland’s biggest ever circular economy project with 20 pilot projects and 20 partners.

The team is coming with circular economy solutions for construction, agriculture, industry, food systems as well as households.

They have also developed circular economy roadmaps for four key areas across Finland.  And they have selected ten pioneering communities that will promote material efficiency and recycling. Also, a circular economy network offers expert services to companies, towns and cities.

Overall, this Integrated Project is helping Finland to realise its national waste management plan and to meet EU waste targets.

Waste not, want not

Europe’s food service industry produces 10.5 million tonnes of food waste each year. That’s around 1 000 times heavier than the Eiffel Tower. But much of this waste could be avoided. The LIFE FOSTER project team is taking practical measures to cut this waste in restaurants across four EU countries.

To do this, they are recruiting 400 trainers from Italy, France, Spain and Malta who go into restaurants to educate chefs, kitchen staff and front of house personnel on how to stop food waste and to improve food storage. Around 6 700 students are also being trained and will go on work placements in these restaurants. It is expected that more than 3 600 companies and around 10 000 food sector operators will become involved.

Extracting valuable powder for use in other industries

Metalworking involves shaping metal to create objects, from huge ships, and bridges down to engine parts and jewellery. But only a small portion of iron oxide – important for the pharmaceutical, paint, plastics and numerous other industries – is recovered during the process. The rest goes to landfill. On top of this, current recycling methods are expensive and use a lot of energy.

The LIFE GreenPowder team has found a new way of extracting these iron oxide particles. Their method does not produce any hazardous substances and it cuts energy and emissions by half. The team plans to set up a pilot plant to demonstrate its approach.  It is expected that the recovered iron oxide particles could be used to mould products like car parts and even toys. It could also be used in 3D-printing applications.

Slovenia is the EU’s third-largest hop producer. However, farmers use a synthetic twine to support hop plants, which takes 450 years to biodegrade. This twine also remains tangled in the leftover hop leaves and vines, preventing this waste from being reused.

The team behind LIFE BioTHOP has come up with a new twine that is 100% recyclable and biodegrades in roughly one year. This means that the leftover biomass after harvest can be used to produce a safe compost. It can also serve as a base for making 100% biodegradable planting pots and bottle trays.

The team is currently testing its approach on land in the Lower Savinja Valley and thinks it could eventually be used by hop-growing regions across the EU and beyond.

The building blocks for a low carbon economy

Brick manufacturing consumes a lot of raw materials and produces high emission levels. The team behind LIFE HYPOBRICK aims to help Europe’s brick industry become more sustainable. To do this, they are making bricks out of waste from other sectors. They also plan on removing the firing stage during manufacturing. Instead, they are developing a new technology that cures the bricks at very low temperatures, reducing emissions by up to 90%.

It is expected that their approach could be used to make other materials like roof tiles and slabs.